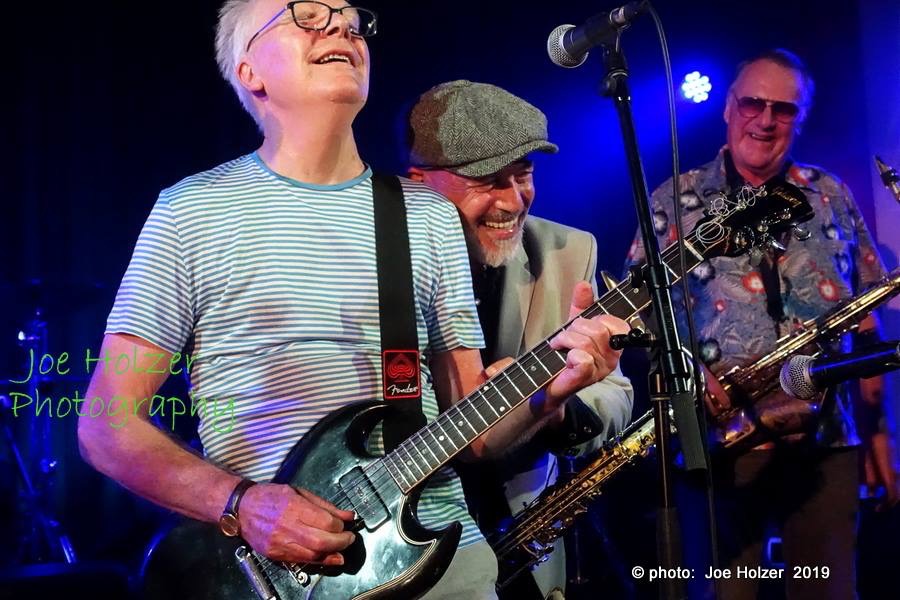 March 2019 at the John Power tribute gig at Memo Hall

Born and raised in Adelaide in the middle of the last century Tony took up guitar aged 13 initially studying classical guitar technique with Lionel Ward, later self teaching the electric lead guitar. First group Village Eyes with classmates at Brighton High School soon got gigs at local dances playing the rhythm & blues made popular by English beat groups.. also soul and psychedelia.. gigging around Adelaide and South Australia. Tony’s older brother Kym also joined the band and eldest brother Michael managed it. A family affair! Although the other members did not continue with music as a career this became Tony’s ambition.

Four piece beat group Musick Express already had a following when they asked Tony to join in 1969 before moving to Melbourne in 1970 and releasing the single Jackie’s Thing (B side How does paternity suit you Tony’s first published composition), appearing on many TV shows and gigging extensively in Melbourne and throughout Australia. Returning to Adelaide in ’71 and reforming landed a gig in Sydney as band for controversial stage production Oh Calcutta! After rehearsing the show for a month it was banned after its first performance. Australia wasn’t ready for a naked stage show!!

Tony and Wendy got married and soon after (March 1973) sailed to London on the SS Galileo seeking fame and fortune! London had a vastly larger rock scene than Australia at this time. They loved their new life and it became their home for the next four years. Successful auditions with a reforming Atomic Rooster, Stars (with Davy Jack and Lionel Morton) Peachy Keen and Mirrors followed. However what unexpectedly turned out to be the most successful gig was with newly invented glam-rocker Alvin Stardust!  When his first single My Coo Ka Choo made number one on the strength of Pirate Radio and TV appearances he needed to form a band. Tony answered the add in Melody Maker and got the gig. With Alvin Stardust Tony toured all over the UK and Europe as well as many appearances on television including Top of the Pops. At the same time Wendy was working at Barbara Hulanicki’s iconic big BIBA store in Kensington High Street. Unfortunately after a year Alvin reverted to playing the midlands cabaret circuit.. and Tony left. At the end of 1976, reluctant to face a fourth English winter, he and Wendy returned home.

Tony’s arrival back in Melbourne luckily coincided with a guitarist vacancy in  Jo Jo Zep & the Falcons, an established live act already with an album to their name.  The next five years produced two gold albums with the writing team of Camilliri, Burstin & Faehse..  Screaming Targets, Hats Off Step Lively and the evergreen tracks Shape I’m In, Hit & Run and So Young. Regularly appearing on Countdown and other television shows the band toured all over Australia with a world promotional trip in 1980. Jo Jo Zep & the Falcons rightly hold their place in Australian rock history, and were inducted into the ARIA Hall of Fame in 2007. In line with the current interest in classic but now vintage Australian music the band continues to do occasional special performances memorably supporting Elvis Costello for the 2013 Day on the Green tour, just like they did when he first toured Australia in 1980

After 1996 Tony stepped back from full time music to open vintage design shop Retro Active with Wendy. This proved to be a successful venture. And then, with no criteria but to create his own music his own way he returned to writing and recording, releasing his first album Learn to Fly in 2000. St Tropez (2004), Dance With a Flower in Your Hair (2007), If you’re a cat (2010) and Fancy That (2012) followed.

For some years Home & Away used numerous excerpts from Tony’s tracks, licensing being a useful commercial application of his music, and there are film music and other licensing possibilities now in progress.

A new album, FLOW the first in 8 years was released on the 28th of August 2020. All of Tony’s music is available on streaming (SPOTIFY) and download (iTunes) sites and CDs available from this website, $10 for previous releases $25 for the new album postage included.